So the V2K has been an absolute blast. There is NO replacement for the power that cruiser has – short of hopping on a crotch rocket or a Hayabusa or such. But for me? The V2K is and will always affectionately be referred to as “The Beast”.

Unfortunately, “The Beast” IS a beast. It’s a bit more than I really like to push around these days. I suspect “Mr. Nasty” comes in close to 900 pounds- maybe even over. While I don’t figure I’m completely over the hill, Mr. Nasty takes some effort. So a couple of months ago, I started looking around based on the things that I LIKED about Mr. Nasty and some of the things that I DIDN’T like.

What AM I looking for?

I’m a cruiser guy. Call me King Graybeard these days – like so many of the 50+ year old bikers out there. Kristty says we’re all re-living our youth. Maybe so. But when I get too old to ride and smell that fresh air? Well, I’m not looking forward to it – and for now, I’m going to squeeze every minute out of it I can. Life is short and you never know when it’s going to be too late to do those things you figure you have all the time in the world to do – and then discover you no longer CAN do those things.

Anyway, for my main bike, I definitely wanted a cruiser. I wanted something a BIT lighter at least. I also wanted something that had a lowER center of gravity. Something that I could comfortably swing into corners. My old 650 was almost like a dirt bike to me. The V2K is a bit harder to whip in and out. Not that it can’t be done, but it IS a big bike. Something that could be customized and not like everybody else’s. Something that would be quick to change. Swear to GOD swapping out the luggage rack last year on the V2K turned into an all day affair.

That said, I DO like being able to cart stuff around as I tend to ride the bike whenever I can – grocery store to pick up a few things, go grab a coffee, general running around town. Having no storage is just NOT an option. And not just a little storage. They have to be BIG enough to actually store something – not a grapefruit. I don’t go and do full-on grocery shopping, but if I pick up a bag of chips, I don’t want to end up home trying to eat potato crumbs. And then something truly with that “American” retro feel…

There she was, just a-walkin’ down the street…

And then I saw it. A gorgeous 2005 Harley FLHRI aka Road King. 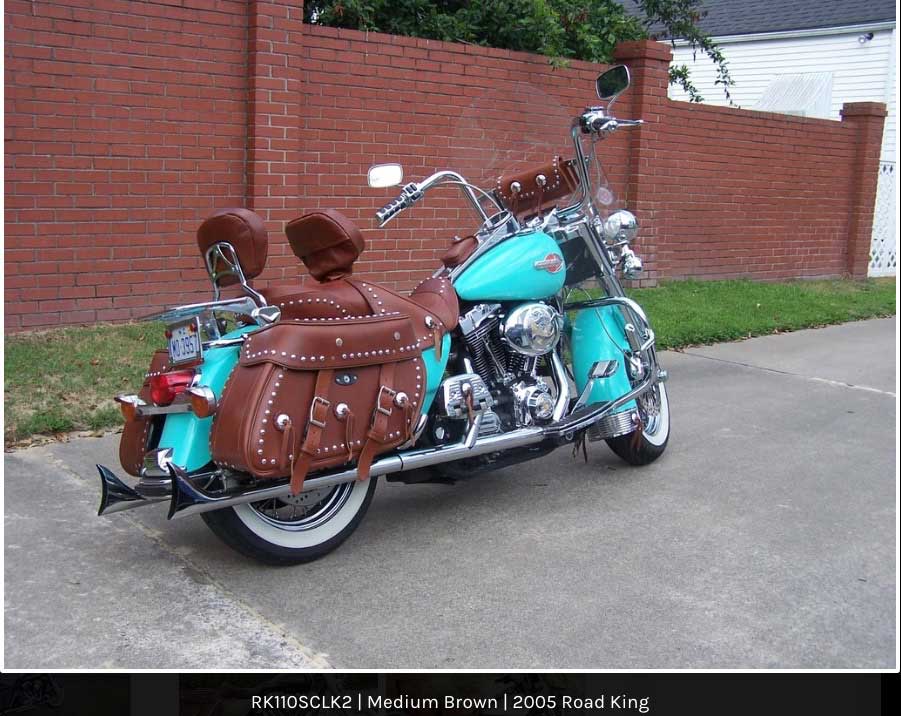 She was beautiful. Loved the color – I’ve had this teal fixation going on now for a few years. Loved the leather – the retro-ness of it all. She’s a Harley. Honestly, I was keeping my eyes open for Harleys in particular. Harleys are just the epitome of American bikes. And the classic American V-twin look is completely embodied by the Road King. THE classic American bike.

She was just down the road in Greenville NC at Carolina V-Twin. Went down the first Saturday. It was a cold, nasty crappy day – as winter/spring here often can be. Looked at her and another few bikes that day. Long story short, went back the next Saturday on my bike actually with the title in my pocket – just in case. Ready to do the trade. Still was a lot of money and they weren’t going to do much for me as far as trade-in. It is what it is. You NEVER get what you think it’s worth on trade-in. So ended up leaving and running through the whole thing in my mind all the way back home – an hour and a half away. Got home – and decided that was the bike I wanted. Called back, made the deal.

The bike was already very custom, the paint color (originally appearing in 1949 as Peacock Blue), the leather – courtesy of the folks over at Leatherworks (follow the link to Leatherworks and you’ll see where I got the pic above!), a lot of the “Live to Ride” two-tone silver and gold Harley stuff, Screaming Eagle upgrades… Just wow. There really is NOT much on here that has not already been customized – if it CAN be chromed, it IS chromed.

I just felt I would not find a better mix of things I was really looking for at that price point. Sure I could go out and buy something at a lesser price, but by the time I modded things, I would have more into it than this bike. Could EASILY have spent more, but for what *I* wanted out of a bike? This really is plenty. I hope to do some longer rides this year and going forward, but I am not looking for a bike to do a California and back tour – mostly around town and the occasional run to the coast.

The differences between the actual picture above and the bike I ended up with are that the whitewalls are just blackwalls – but give me a few weeks – and the exhausts have been replaced by Rinehart exhausts. They sound great – they WILL stay.

I am “making it my own” currently with really just a few swaps. The footpegs were appropriate for someone a LOT shorter than me. Those should be in today – there was NO way to get the originals to work for me sadly. I do like fringe on the levers – covered. Discovered the hard way that the quick-connect fasteners on the bags are NOT completely foolproof. Watched the right bag rolling down the street behind me a couple days ago SMH. Only one scrape on the top. Annoying yes, but not traumatic. Ordered some screw-type fasteners.

The grips are a little beat up. Going to replace those – looking for some leather ones I believe. Want a throttle lock on there – or maybe a cruise control. Apparently, the cruise controls are pretty tough to find these days though – and digging that far into the bike at the moment isn’t something I want to do. Going with a Brakeaway setup like the one I have had on the Vulcan for a while. You can always pop a cheap throttle lock on your bike, but the Brakeaway automatically kicks out the second you touch your front brake – which is ALWAYS a given if you need to do an unexpected stop. Getting into an emergency situation and expecting that throttle to roll back to idle on you can be a dangerous thing. Needed a stomp shift. Going to pop on color-coordinated soft engine guard leather chaps from the fine folks over at Chilhowee Leathers.

The thing I really like about this RK is that you can find parts. All SORTS of parts. All sorts of information. The V2K is an awesome bike, but it’s been out of production now for many years, there really were only so many of them made. And just not that many floating around. There are places to learn more about them and even a FB group or two. Once you have it set up the way you want, it IS fine, but when it comes to options? The Road King is the beast.

I can see with all the quick disconnect options and just general options having a few “versions” of this bike 😉 I can see that two-up seat having a solo seat alternative – maybe a black Mustang solo. I can see that windshield having a fairing alternative. The original RK hard bags came with the bike and are painted in that Peacock Blue as well. They would be a quick swap. The backrest and luggage rack are the quick disconnect style. I can definitely see this having a lean and mean “alt solo” setup going on. Maybe even going with black accessories and black leather. Swap the seat and bags, the only leather that’s left is really the windshield bag – well, at the moment. Might be a tool bag in the future and probably a trunk bag at some point, but… Could likely have a completely different look and setup in under 30 minutes with the way these things are set up on the Road King.

I smell an ongoing project that will be fun for quite a while!