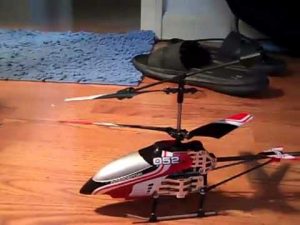 Dec 25, 2014 – A missing helicopter was reported around 3:45pm on Dec 24, 2014 near the town of Four Oaks, NC.  A Radio Shack 2014 Skyking, recently acquired for Erickson Enterprises by Kristty Smith as a Christmas gift, was reported missing and presumed downed approximately 2 minutes after final takeoff on Wednesday.  There was a distress signal given by ground pilot, April Thompson Wright, seconds before the craft disappeared out of sight. Emergency landing directives were immediately issued, but the craft has neither been seen nor heard from again.

An extensive ground search by the ground pilot, and ground crew including Steve Wright, Parker Wright, Tony Thomposon, company representatives Kristty Smith and Eric Erickson, turned up no clues as to the disappearance of the craft.  The NTSB was not notified.

“One minute it was flying just beautifully, and the next it was just gone. I really… just don’t know what happened,” claimed helicopter pilot Wright.

Parker Wright, Mrs. Wright’s son, was quoted as saying, “It was so high! Did you see it??!”  Miss Smith was only heard laughing hysterically in the distance.  Despite attempts at restarting the engine for a remote takeoff, there were no indications of the craft’s whereabouts.

Dubbed flight CHR-2014, the craft’s maiden voyage was to be unmercifully short. Despite a lengthy 30 minute charging period after acquisition, it’s service time would only accumulate a total of approximately 4.5 minutes before the disappearance occured.

The investigation is ongoing, but the craft is presumed downed and lost.

UPDATE: Dec 25,2014 – 6:50pm EDT: All search crews have been recalled for the evening. Continued searching may resume as early as first light, though there is some doubt as to the value of continued searching. Recovery efforts have been centered around the home of Tony Thompson in Benson, NC.

The search radius was expanded by approximately 250 feet earlier in the day. One searcher, Colin Thompson, offered to source a 30′ extension ladder to search among the neighboring pines for signs of wreckage. This approach was dismissed over safety concerns for Mr. Thompson. Experts indicated that there is little hope that the aircraft has any remaining power after 24 hours and there will likely be no operational safety lights to pinpoint the wreckage.

“We’re just going to have to play it by ear. I just don’t see much hope of finding the craft at this point. The weather was gusty and there was a very light rain falling. Visibility was definitely reduced at the time of the accident and that’s making trying to determine the final resting point of the craft almost impossible,” said company spokesperson Erickson.

The craft is currently listed as “overdue and presumed lost.” Search teams may be assembled in the morning for a final grid search, but it appears that the craft whereabouts may never be known.

Ground pilot April Thompson Wright was only a novice pilot with just under a minute and fifteen seconds of flying time before the presumed accident occurred. Experts believe that lack of experience may have been a strongly contributing factor in the disappearance and likely resulting crash. Wright remained unavailable despite attempts to contact her for comment.

It is unclear at this point whether Wright may face any civil or criminal penalties.