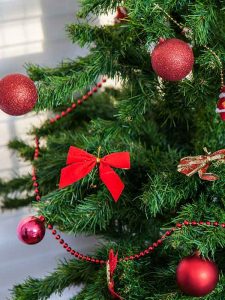 Okay, so last Thursday was Thanksgiving. As a frequent consumer at most of the local stores, I’m pretty familiar with the “busy” times and the LESS busy times. I pulled into the local Walmart yesterday and was greeted by several hundred cars in the parking lot. NORMALLY, I would content with maybe 75-100. Is Black Friday a magical bell that goes off in everyone’s head that it’s shopping season? “Quickly now!  SHOP SHOP SHOP!”  I was floored when I saw all those cars. Last week, as I say, probably only a hundred or so cars at the same time.

I’ve come to grips with the season after all these years. I was okay with it this year when it started the day before Halloween. My fiancee wasn’t though which is rather unusual – she’s always been “The Christmas Queen.”  She’s one of only a few that I know that get all jazzed up when anyone even mentions Christmas – even in the middle of July. She was slow to warm up to the idea this year.  I think it was because she realized all the decorating that was going to need doing.

She’s a hair stylist and has a salon in Clayton NC. Her customers are middle aged and some are on the elderly side and apparently really look forward to seeing the magic that she creates in her salon each year. Like I say – she gets into it.  She spent Sunday down there after Thanksgiving. She came home after several hours decorating and announced that she was done. Period. There would be no decorations here at the house this year. I’m a bit bummed out – particularly since she took all the decorations I BOUGHT last year for the house down to her shop THIS year to decorate.  It does appear though that this might change. Christmas may be here at our house this year for her family. At which point she will HAVE to decorate.  Good times.