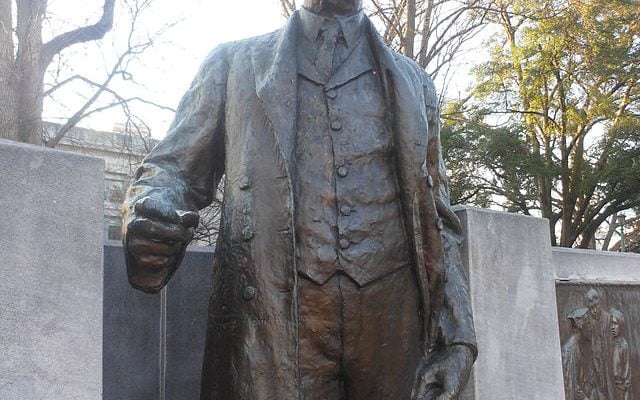 Really?? WRAL (yes, I’m watching the news already this am…)  just reported on a meeting to discuss changing the name of Aycock Residence Hall at East Carolina University to something else.  Why you ask?  Because he was a spokesperson in 1898 and 1900 of white supremacy campaigns.

Listen folks, end the wailing, gnashing of teeth, “want to rewrite history depending on political correctness at the drop of a hat” liberalism. Enough already.  If you want to take the man’s name off a residence hall because he had some currently deemed “unacceptable” viewpoints, where do you want to draw that line?

Let’s take a QUICK look at a few names out there.  The Von Braun Center in Huntsville Alabama.  AMERICA’S Father of the Space Age.   Card-carrying Nazi and developer of V1 and V2 rockets that caused so much destruction in England as part of WW II.  Although he, according to all reports, was never involved in the atrocities that so shocked and horrified the world, he was still a Nazi.  He was still integral to killing and wounding a LOT of our ally country’s citizens. Unsubstantiated numbers below:

A lot of deaths – even if these numbers are incorrect, it’s obvious there was some serious damage.  But he’s got HIS name all over a center in Alabama.  No signs protesting that.

Speaking of World War 2, hell, the Japanese were lopping off heads of American soldiers left and right only about 70 years ago. I don’t see anyone boycotting their Honda, Mitsubishi or Lexus cars or trying to change names on them. Or bitching about their Sony televisions.  NOW, they’re our buddy.

And let’s go back yet a bit further to examine our own American political-correctness hypocrisy.  What do we do with names that are all over things like some of the founding fathers, George Washington and Thomas Jefferson?  Both were verified slave owners.  Washington provided emancipation for his slaves AFTER HIS DEATH. So does that make him a good person?  Thomas Jefferson was one of the largest slave owners in Virginia at points during his life.  That would certainly be unacceptable according to current, politically-correct acceptable viewpoints.

If you want to start down this road, then be prepared to change an awful LOT of roads – like all those roads that are named “Washington Street” or “Jefferson Street”.  I suspect you’ll probably also want to be changing the names of “Washington DC” and probably the state of Washington.  I suspect there are a lot of towns out there that paid homage to both of these presidents by taking it as their official municipality name.  I foresee a whole lot of realigning here that needs to be done.

But you know what? It goes back even further than that.  The Greeks and Romans, to whom we owe so much of our ideas of freedom and democracy, also were firm believers in slavery.  Without turning this into a long rant – where do you want to draw the line Mr. History Rewriting Moron? I think there have been far more reproachable people to worry about than Charles Aycock.

Aycock was active with the white supremacists at the turn of last century – no, NOT the one about 15 years ago, the one about 115 years ago.  He did a lot of great things for education period. Should we throw out all of the positive things he did because some of his views are now socially unacceptable?  I think not.

I think very few of us could stand up to scrutiny of all the things that we individually have done, opinions we have held throughout our lives.  As we age and become more aware of the world around us, we hopefully gain some wisdom. Hopefully that does reflect in some of our choices and decisions.   But to negate all the positives of someone’s life because of political correctness being applied oh… a century or so down the road?

I think not. Then again, we can just stay quiet and let George Orwell’s 1984 become a reality. Continual rewriting of history to suit the current purposes.

The world has too many mouthpieces filled with “high-mindedness” and short on reality.